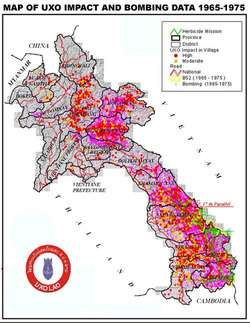 From 1965 to 1975, Laos was engaged in what was known as " a secret war," strategically enforced to attempt to block the  movement of troops through to combat in the South. During this time, bombers were allowed to ignore all rules of engagement, basically given permission to destroy all temples, buildings, or hospitals that they saw. This "secret war" became one of the costliest and destructive in modern history: 2 million dollars a day, for 9 years, for the American taxpayer, and ten tons of explosive ordinance per square kilometer dropped on the Laos landscape. This, in addition to the use of Agent Orange, resulted in stripped and deforested mountains, polluted waters, poisoned crops, and numerous diseases. currently there are numerous organizations and volunteers dedicated to removing undetonated explosives from this ravaged region.
Powered by